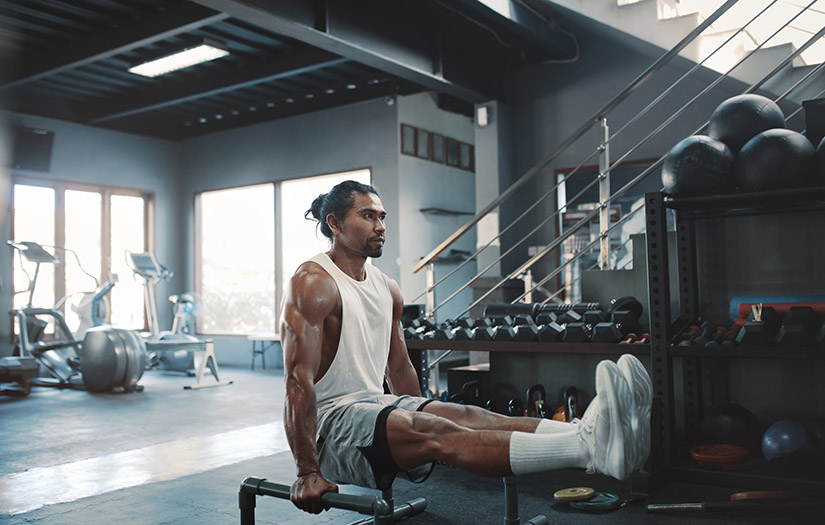 Today, Monty will show you the many effective ways you can build strong triceps with parallettes.

These workouts are a great way to spice up your at-home workouts. They are also a fun way to shake up workout programming with clients.This video will explore the following movements:

Today, I'm going to be talking about how you can do tricep exercises with parallettes. If you don't have parallettes, that's fine. You can also use a couple of stools, a couple of chairs, or even just stack up a few books so you can kind of get the same effect. So we're going to go through four different exercises.

We're going to start off with some tricep dips. So guys, you may have done these on your couch or on your bed, or even in the gym on a bench or something like that. I'm going to show you how you can do them with parallettes.

Now, this is actually pretty simple, but I'm just going to give you guys a few coaching cues that you may want to use with your clients. So when you begin, you want to start with your hips in line with your hands, legs out nice and straight. You're then going to dip and come back up. I'll just do a few reps so you can see.

Okay? Now, I'm going to show you a couple of different ways that people can mess up with those two. So sometimes people will have their feet underneath them this way, and they'll kind of lean forward and actually not have too much weight on their triceps. What they end up doing is kind of like some sort of a very small squat.

The second one is the angle of my elbow. I want to make sure the angle this way is nice and small. That's really going to put the muscles of the triceps on a stretch and it's going to make them work a lot harder. So one common mistake that you'll also see is that people kind of lean forward this way, even if they've got their legs out straight and their shoulders dip in front.

And if you actually look at my elbow joint, I'm almost not even getting past 90 degrees. If I really want to work my triceps, particularly the lower part of my triceps, this has to bend backwards. So when you're doing these tricep dips, you want to make sure that your elbows are shooting back and they're loading up that way.

If your clients struggle to put loads of weight in their hands, or if they struggle to go to that really harsh elbow angle, you can actually use the common errors as ways to regress the exercise.

And those two things there will help you moderate the intensity of those tricep dips. One more thing. If they're finding parallettes uncomfortable, you can actually grab a band or a pair of socks, and you can just wrap the band over the top. That really just takes out the harshness of that solid metal bar.

The next one that I'm going to go through is a tricep push-up. The skull crusher is going to come in a minute. So a normal push-up on the parallettes looks like this. You're going to come all the way down and push back up. Okay? I'm working a lot more than just my triceps there. I'm getting some chest in there, some shoulders, some core, you name it.

So I'm going to keep my elbows above the parallettes and in line with it. And I'm trying to get my elbows to land just in front of my hand.

You can see there's a lot less motion going on at my shoulder and my shoulder blade. And it's actually a lot more elbow. So what that looks like translated to here is that. So my elbow does more of the movement. My triceps end up getting more of the work.

Again, if that's too aggressive for your client, just regress it. And there's two ways you can regress it. The most basic way that you can do it is by getting their knees right underneath their hips.

That's really going to unload the arms, really unload the triceps. This is a great way for them to practice the technique and start to build up a little bit of load tolerance.

If you want to make it a little bit harder still, you bring the knees further back and you press the hips forward, and then from there, you repeat the same process. It does change the angle of the press up a little bit.

So yes, it does change it a little bit, but that's okay. You can still de-load the triceps a little bit by just bringing the hands on the knees. And then obviously, the more advanced one is the one where you've got your feet on the floor with your knees off the floor.

Not that you'd do that. So I'm going to show you a way to set up these a couple of different ways. You can either have them as one bar going across this way and you'd just do that by lining them up. That can sometimes be a little bit uncomfortable in the wrist, so if you want to, you can play around with the angles.

So what I've done there is just I flared them out a little bit. And that feels a little bit more wrist friendly to me and to my wrists, but you may prefer having them completely straight on and working on a fixed bar.

Now, I will say, if you try to go too hard on this too soon, you will imprint your forehead on the bar if you can't control it. Don't do that. I want you to make sure that you can watch the rest of the video, because we've got another one coming up. So when you're here, start at the most basic level, have your knees right under your hips.

And I want you to pretend as if your headbutting the bar and use your triceps to push yourself back up. You can make that harder still. I'm going to turn these in a little bit, just because I find it a bit more comfortable. I'm going to bring my knees further back. I'm going to press my hips forward.

And I'm going to repeat the same process pretending as if I'm trying to snap a stick over my forehead. That's really going to dial the work into the triceps.

The third level, make sure that you've built up to this. You can do that if you want, if you want to level in between, but otherwise, the full version is here and that is really hard and really quite advanced. Not only do you need good tricep strength, you need good core strength to do that, as well.

So I'm having to push myself out and pull myself back in. Okay? So even though I said that we're doing triceps today, that's really going to blast your arms completely. So just to recap, you've got tricep dips on the parallettes. You've done them before. Give them a go on the parallettes.

So guys, let me know how you get on with that. If you don't have parallettes, don't worry about it. Like I said, you can do it with a couple of chairs, a couple of stools, or just anything that's going to elevate your hands.

Guys, give them a go and let me know how you get on with them. My Instagram for my Personal Training business Move With Monty. Just drop me a DM. I would love to hear how you get on 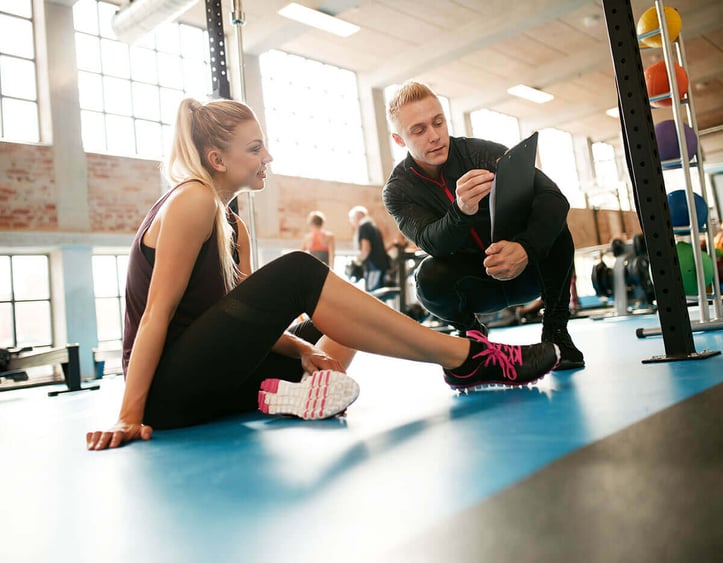 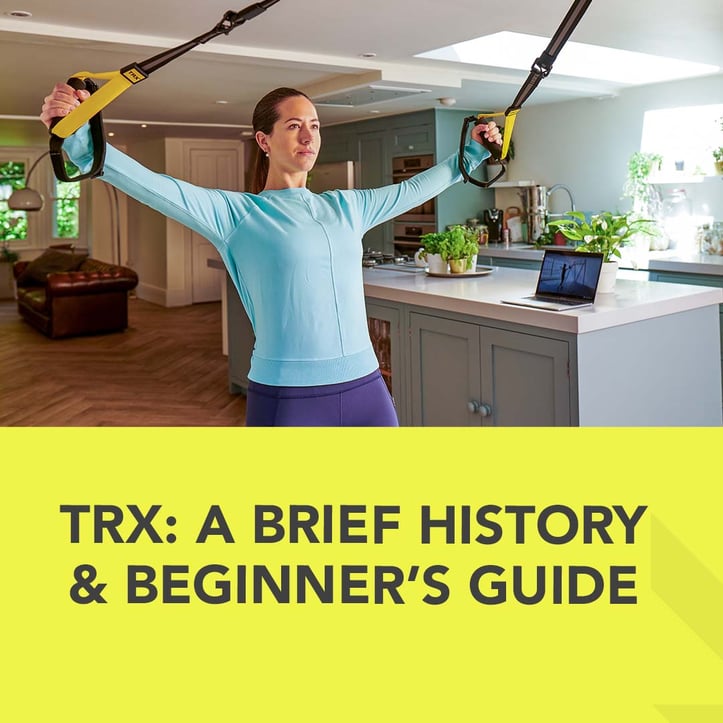 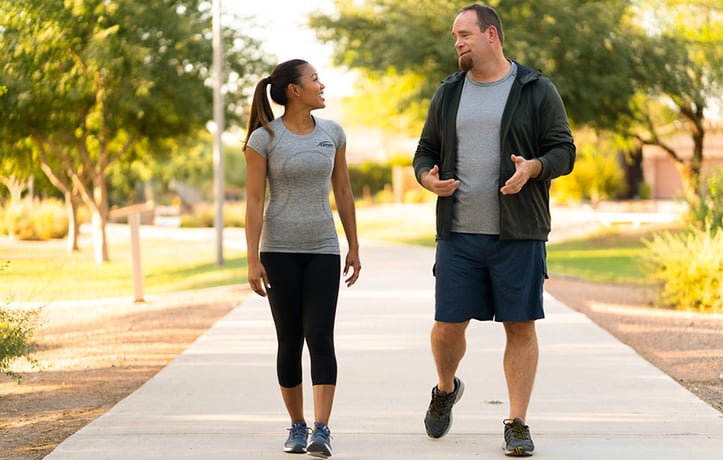 Best Practices as a Personal Trainer